The blog has moved to:

WordPress no longer works on my home computer (old!)

Since road crews clearing the way on some high mountain roads closed in winter found drifts 50 feet deep, let’s take a look at some snow, at Lassen NP 50 miles east of Redding.

But first, an overview of the winter.

How much snow is there?

“The Tioga Road closes due to snow, usually from sometime in November through late May or early June. The road closure extends from the Tuolumne Grove, just east of Crane Flat, to Tioga Pass Entrance Station. (Highway 120, the continuation of the Tioga Road outside the park, is often closed in winter from Tioga Pass to five miles west of Lee Vining.)
When the Tioga Road is closed, it is not possible to drive to Tuolumne Meadows or enter Yosemite National Park from the east. All other park entrances, including those along Highway 120 from the west, Hetch Hetchy, Highway 140, and Highway 41, remain open all year”.
http://www.sfgate.com/business/article/Yosemite-access-from-Tioga-Pass-may-not-be-clear-11165375.php
http://www.latimes.com/local/lanow/la-me-ln-big-sur-pch-mudslide-20170523-htmlstory.html
http://www.sfgate.com/news/article/reservoirs-California-full-end-drought-shasta-lake-11048817.php
Ground crumbling beneath popular photo spot on California coast:
http://www.sfgate.com/weather/article/Historic-Humboldt-lighthouse-in-peril-11026376.php
https://www.nytimes.com/2017/04/24/science/cactus-superbloom-spring.html
Black Rock Desert is a giant puddle: How will this impact Burning Man?
By Amy Graff, SFGATE
Updated 9:23 am, Saturday, June 17, 2017
http://www.sfgate.com/bayarea/article/Black-Rock-Desert-lake-water-Burning-Man-Nevada-11225900.php
—————————-
Study: California’s seasonal rain and snow triggering earthquakes
By Kurtis Alexander
Updated 4:47 pm, Thursday, June 15, 2017
http://www.sfgate.com/bayarea/article/Study-California-s-seasonal-rain-and-snow-11222979.php
http://www.sfgate.com/news/article/Snowbound-California-roads-still-getting-a-major-11221528.php
Snowbound California roads still getting a major plow job
Updated 1:06 am, Thursday, June 15, 2017
In Lassen Volcanic National Park, much farther north, deep snow still buries the road that circles the southernmost peak in the Cascade Range. The road is expected to open in early July.
http://www.sfgate.com/bayarea/article/Rockslide-closed-Hwy-140-entrance-to-Yosemite-11216868.php
—————————-
Now back to Lassen. There’s only one road that meanders thru the western half of Lassen, the whole eastern half is wilderness, this is a park for serious backpackers, about all i could do was stop at all the turn-outs.
Highest point in the drive? 8512 ft.

I went on Memorial day weekend, there was no lack of snow, and i could hear helicopters in the distance, dropping off skiers at the summit. Meanwhile the thermal hot springs/vents belched out steam… amidst all this snow. What a contrast! 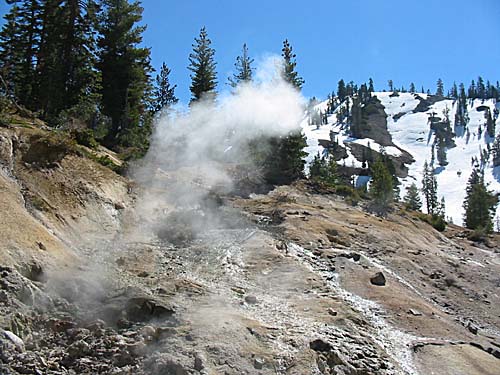 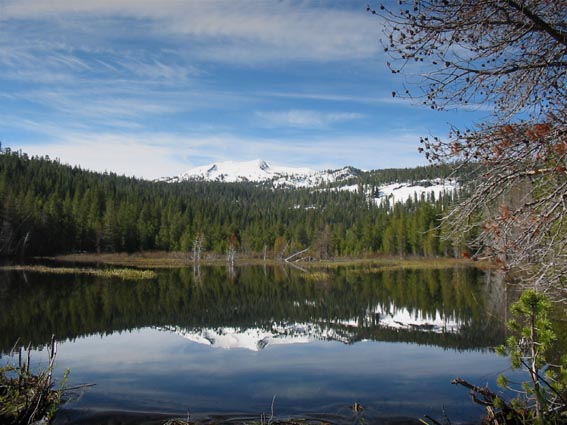 The landscape was awesome, and i won’t try to describe, a picture is worth a thousand words.

The pines thrive regardless.

One of the views i shot in B&W film, while the ranger parked next to me said there had been a bear spotted on that mountainside recently. I took that to heart, and when i got home i dug out a neg of a redwood-carved bear i shot on another trip, and printed this. 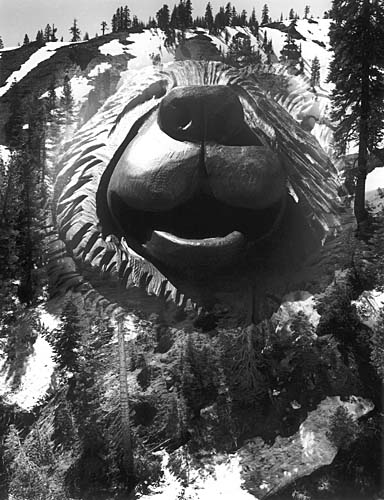 Only title i can think of is “Bear!” – whether this is in fear or surprise i have no idea.
Maybe it’s just in wonder – isn’t that enough?

Another B&W found it’s way into my darkroom:

How ’bout a few good pages i stumbled upon: