This trip may become several (or more) posts – it was that good, and the photos are that voluminous!
Winter is the best time to visit the southwestern deserts – during the day it’s actually comfortable, 50-60 degrees, the sun is lower in the sky, the light is pretty ‘sweet’ all day long.
In late 2008 i got a ‘bee in my bonnet’ about seeing petroglyphs – I’d seen a few in Joshua Tree, but that just whetted my appetite for more. I’d read about Valley of Fire SP north of Las Vegas, and Red Rock Canyon just west of Vegas… so here we go, hittin’ the road..
I leave SF in the AM, drive like a bat out of hell south thru the central valley, and spend the first night in Mojave CA.
I’ve always enjoyed the drive – California is such a multifaceted place landscape-wise. I leave coastal Ca, drive thru San Jose, Gilroy and then over the hills to the valley, flat as a pancake, very industrial and agricultural. At Bakersfield, you hang a left (Rte 58), and go over the Tehachapi pass, and land in high desert.
When i wake up the next day, the storms i have been running just ahead of seem to be catching up w/ me, sort of.

Great clouds, the batteries in my pentax 6×7 can only stand a few minutes outside the car before they give it up and the SLR mirror refuses to work/locks up.
Very Happy to have an old Yashica-D TLR – no batteries, nothing electronic, it’s 50+ YO, and still works come hell or high water. 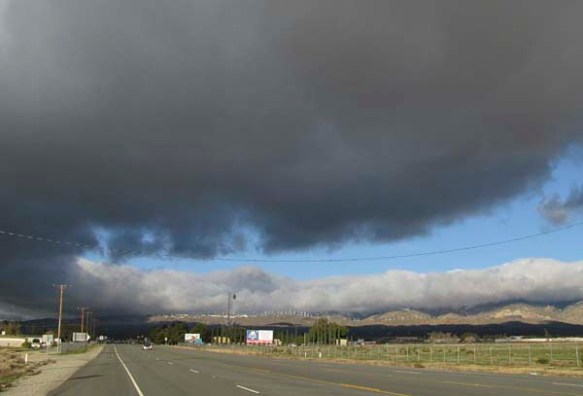 I drive to Vegas ( continue on Rte 58 to Barstow, hang a left on Rte 15), get a motel room  – a Motel 6 on Dean Martin Drive.. and take a quick dash out to VOF, to scope things out. I am probably one of the few people to ever visit LV and do nothing ‘Vegas’.
VOF is about 45 minutes north of LV, as you take the exit off Rte 15 you come upon a place that only happens in areas where population is sparse, services are limited, but when you do find them?… well, there’s a huge store that has everything you could want or need. I forget the name of the place, but they offer: fireworks (no cell phones or electronic devices allowed in this area, other wise your body parts may end up in orbit!) T-shirts, clothes, boots, anything you’d find in a ‘general store’, a small restaurant, and of course booze and smoke-ables of all kinds. Oh yes, and gas diesel, and oil. It’s run by the local indian tribe, so of course there are lots of native american things for sale, and one armed bandits too. I wandered for nearly an hour, just taking it all in.

VOF was fascinating – this is a landscape equal to Joshua Tree, just doesn’t get the same respect ’cause it’s only a state park.

On the way back to the motel, i took in one of the most awesome skies I have ever seen – the light bounced from the clouds cast an eerie glow on distant mountains, at sunset the undersides of a gnarly storm cloud were lit up, it lasted only a few minutes, but it was the kind of thing roadtrips are about – a unique event that burns into your memory.

Where do all the red rocks come from?
According to to a BLM publication i got, it took 600 million years for this to happen, roughly speaking it goes like this:
600 million years ago, the land that would become RRC was under the ocean, layer upon layer of deposits, and millions of years later, these deposits were pushed up and became rock. Exposure to the elements caused iron bearing minerals to oxidize, and create the red orange and tan hues. A geologist of any stature would call me a rank amateur, and be quite correct.

I spent a bit more time at Valley of Fire than at Red Rock canyon, here’s a quick look at the landscapes at both places:

These first two are Valley of Fire.

These are Red Rock Canyon:

More to come…. check in again, sometime soon
Part 2 – the petroglyphs at VOF.

After arriving in San Francisco on New Year’s Day 1992, it took me a while to get settled.
I arrived w/ 2500$ to my name, and just what i could fit into a Subaru hatchback.
By 1994 I had managed to get steady work at a custom B&W photo lab, and was doing freelance photo-illustration w/ my darkroom montage techniques, and had socked away enough money to take a week off and head north, to take in every beach and state park I could along the coast.
There ain’t a beach along the way that isn’t worth checking out. 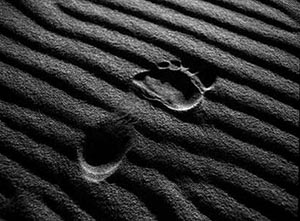 Where ever ya go, take time to.. as the saying goes.. ‘smell the roses’,
stop for a moment and look at whatever that shiney thing is, washed up by the waves. Life isn’t about accumulating things, it’s about experiences.
“They don’t make hearses w/ luggage racks”, that’s a Don Henley lyric/line….
and, as Warren Zevon said very well, “enjoy very sandwich”!

I keep pretty good records of where i go, and where each roll of film is shot, and i still have a box of those contact sheets, correlated w/ a list of locations – if/when i can come back, i’ll know what i want to revisit.
The high points of the trip were: 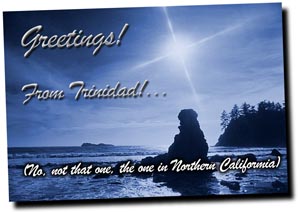 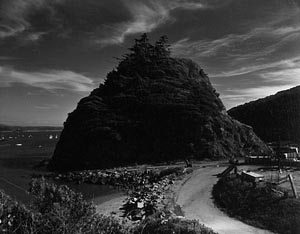 …..& Patrick’s Point SP, where i discovered some marvelous sculptures made from driftwood.
..and one short time spent at a turn out/ viewpoint at sunset that taught me a lot about how life in Northern California can be for people who want to live a life disconnected from all the trappings so many of us are familiar with – a fixed abode, a phone number, a steady job.

First, Trinidad. I took in sunset a few days here, the clouds were awesome, and the sea stacks… well, mother nature is a sculptor. 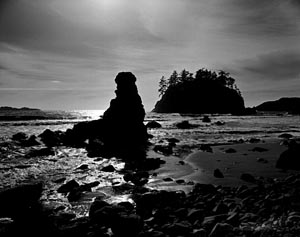 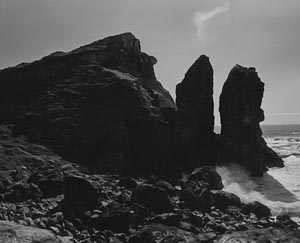 … but also a long beautiful beach where one can find some agate, without looking too hard. I found some:

Wikipedia has this to say:

But i also found some driftwood sculpture that was just amazing, i have done a number of very nice montage images w/ what i found here. 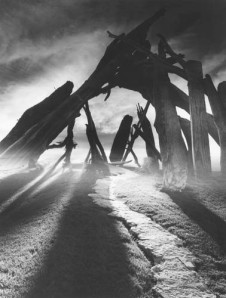 As for the short stop at a turnout at sunset?… well, i make a habit of checking out any turnout/viewpoint. It’s always good to get outta the damn car and stretch your legs.
While i was doing that, an old school bus pulled up into the far end of the parking lot, it stopped w/ it’s door away from me, on the back side. I could see legs moving underneath the bus, and a dog’s legs too, relieving itself, i suppose. The windows on the bus were blacked out, this was obviously not a bus full of school kids, but a mobile home for the owners. I could see a few glimmers of lights go on as the sun set.

Here’s some links for you.
Do some research before you go, the CA budget crunch has changed the openness and availability of many state parks!!

I also stopped at Humboldt Lagoon SP – some great driftwood!

Hope you enjoyed all the above. Next post, around New Years Day/thereabouts?…i think i’ll share a bit of..HHmmm…

Maybe…Death valley, which i have visited several times, the most recent, at X-mas….?
Or maybe the Oregon coast – BIG trees!… and the Umqua Dunes, more sand in one place than i have ever seen! And i have been to Cape Cod, Mass…. and the Outer Banks, N. Carolina.