I take road trips to see the land and whatever else is out there. It’s something I picked up from my Dad – family vacations were always road trips. In a big fat Chevy. I grew up in Maine, and he took us all to any and every thing of interest, I’ve been all over New England, & to Canada.

I’ve been living been living in California for 23 years now, there’s still plenty I haven’t seen, but I’m working on it. It’s a fabulous state – deserts in the south (Joshua Tree and Death Valley), a beautiful coast, and redwoods and wilderness forests in the north.

And i am always packing several cameras, film and now digital.

The ” *aha* moment” is when you  realize in an instant you gotta shot some photos, whatever you see is just too good to not capture.

The So. Cal. desert has quite a reputation for a variety of things.

One of which is weirdness. It’s a place some people come to live in so they can hide, live as far off the grid as they choose. There’s a whole lot of space with little control over the inhabitants. Charles Manson and his crew hid out in Death Valley.

But not everyone wants to hide. Some people are weird alright, but they flaunt it. Pleasantly so.

Somewhere along Rt 247 heading south between Barstow and Joshua Tree was ‘Moby’s Place’. The guy who owned and built it called himself Moby. He was a storyteller, an artist & sculptor whose media was whatever trash he could lay his hands on.

You would slam on the brakes in a heartbeat. i sure did. 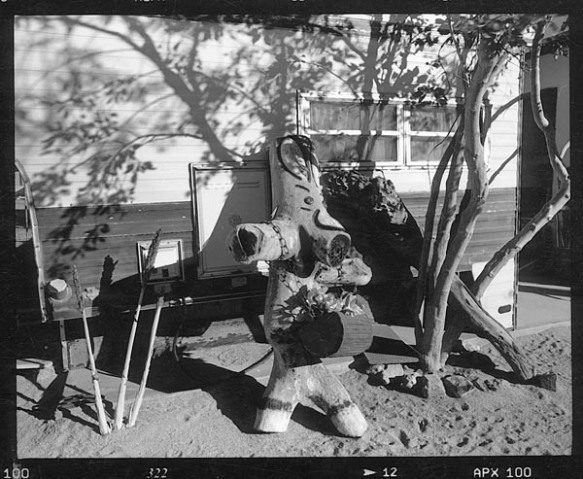 Moby also collected motorcycle parts, BMW in particular, he said he had German visitors find him, somehow, to look for a part for their 1963 BMW bike. 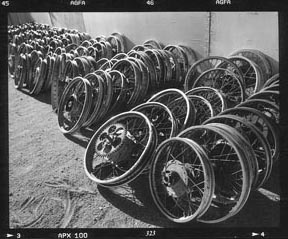 We chatted for a while, he said he’d introduce me to his 8th wife, Bobby, in the trailer. I declined, politely though.

When i passed by many(15?) years later, it was all gone, completely. I guess the old guy met his maker, and when he showed up at the pearly gates, I’ll bet he was asked if he could please continue his work, in whatever way possible in an ethereal world. I’ll bet he blew their heavenly minds.

But in the real world, probate court probably took over, and the place plowed under.

Another place where i had an ‘aha! moment was in SE Arizona, on an extended desert trip. I woke up early smoked a joint, checked out of the motel, got bad gas station coffee, and hit the road, heading north, roughly. On two lane roads, just a dotted white line down the middle. Passed thru a town the name i don’t remember, but i took a left, and lo and behold, this was the view:

Wow! Knocked me out!

I did one of the best montage images I have ever done from one of these 4 frames:

Here’s a few more montage images that came from Moby’s: 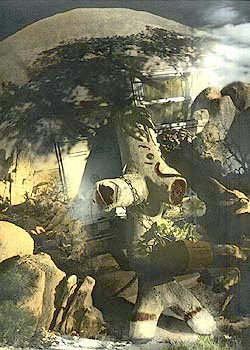 If you like this darkroom montage work, here’s a place you should check out: 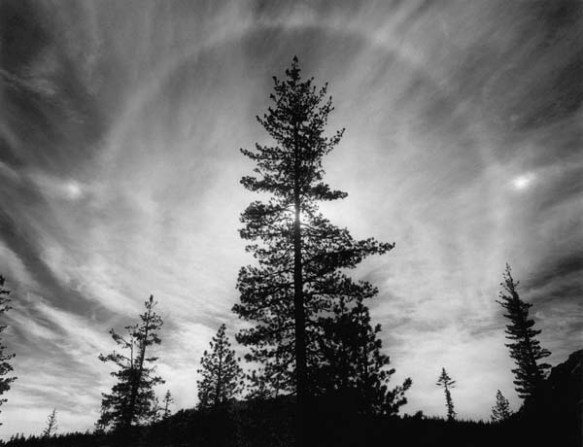 Somewhere in the desert, don’t ask me where. The thing i find most curious about this scene?

Here is a vast landscape, and someone has placed ‘no go/danger’ cones. Excuse me? Who is going to pay any attention to these? and why the fuck should they?? They already know that if they wander on here, they are on their own.

Take a walk on the wild side, go past the cones, explore… carefully.